Fracking push gets go-ahead across UK as ministers tighten safeguards 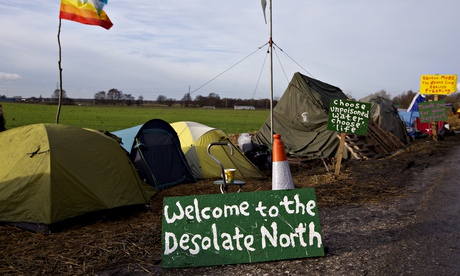 Ministers will give the go-ahead on Monday for a big expansion of fracking across Britain that will allow drilling in national parks and other protected areas in “exceptional circumstances”.

The government will invite firms to bid for onshore oil and gas licences for the first time in six years, with about half of the country advertised for exploration. Ministers are also clarifying the rules on when drilling can take place in national parks, areas of outstanding natural beauty (AONBs) and world heritage sites, following calls by environmental campaigners for an outright ban on drilling in them.

In a tightening of the guidance, the government will ask energy firms to submit an environmental statement that is “particularly comprehensive and detailed” if they want to frack on or near protected countryside, forcing them to demonstrate their understanding of local sensitivities. It will make clear that the applications “should be refused in these areas other than in exceptional circumstances and in the public interest”.

In addition, Eric Pickles, the communities secretary, is likely to make a final decision on more appeals related to protected areas over the next 12 months, instead of leaving it to the planning watchdog.

The competition for licences is likely to attract significant interest from energy companies keen to explore Britain’s new-found shale reserves, particularly in the Bowland basin of the north-west, a central belt of Scotland and the Weald in the south-east. It is the first time the government has offered up areas of the UK for onshore exploration since experts confirmed the scale of the UK’s shale resources and protests erupted in places from Blackpool to Balcombe about the potential for environmental damage.

Lord Ahmad of Wimbledon, a Tory communities minister, will present the licensing round in the House of Lords , as MPs have broken up for their summer break.”We recognise there are areas of outstanding landscape and scenic beauty where the environmental and heritage qualities need to be carefully balanced against the benefits of oil and gas from unconventional hydrocarbons,” Lord Ahmad will say. “Proposals for such development must recognise the importance of these sites.”

The licences are the first step towards exploration but firms will also have to obtain planning consent, permits from the Environment Agency and a sign-off from the Health and Safety Executive.

Over the weekend, Matthew Hancock, the Conservative energy minister, said he wanted to speed up the process so companies are able to start drilling within six months of putting in applications. He also said the guidance published on Monday would “protect Britain’s great national parks and outstanding landscapes”.

This promise is likely to face one of its first tests in Sussex, where a planning decision on a prospective Celtique Energie fracking site in the South Downs National Park is due within weeks. The county council has rejected a separate application from Celtique in nearby Wisborough Green, just outside the national park, because of traffic concerns, which may now be appealed against by the company and end up in the hands of Pickles.

The Conservatives in particular are facing unrest on the backbenches about the prospect of fracking in rural constituencies. The government will hope that its tightening of the rules on national parks will placate local residents, MPs and green campaigners concerned about the impact of fracking on the landscape, drinking water and environment.

But the announcement met with mixed reactions. Louise Hutchins, a Greenpeace energy campaigner, said millions of homeowners have been stripped of their right to stop companies drilling under their property and now communities will face a “fracking postcode lottery”.

“The government has fired the starting gun on a reckless race for shale that could see fracking rigs go up across the British countryside, including in sensitive areas such as those covering major aquifers. Eric Pickles’s supposed veto power over drilling in national parks will do nothing to quell the disquiet of fracking opponents across Britain,” she said.

Hutchins also criticised the timing of the announcement, saying ministers “waited until the parliamentary recess to make their move, no doubt aware of the political headache this will cause to MPs whose constituencies will be affected”.

Caroline Lucas, the Green party MP for Brighton, who was arrested for protesting against fracking in Balcombe last year, also raised concerns that there is no outright ban on fracking in protected areas.

“If this still leaves the door open to fracking in national parks and areas of outstanding natural beauty, it completely undermines the protective status that those areas have been given and renders it meaningless,” she said. “Many campaigners have campaigned for decades to get national park status, and they are given for a reason. The idea that they could be offered up to the fracking firms is a scandal.”

But Shaun Spiers, the chief executive of the Campaign to Protect Rural England, said the government’s change in rhetoric on protecting the countryside would be welcomed. “The government has previously stoked opposition by giving the impression that it is committed to fracking whatever the consequence and however sensitive the location,” he said. “If fracking is to happen, we need to proceed with great caution and with the highest possible safeguards.”

The National Trust, which has previously campaigned for an outright ban, also had a positive reaction, saying it was “right that the government have recognised the concerns about fracking in special places like national parks and AONBs”. However, it called for the new rules to be extended to other special places such as nature reserves and sites of special scientific interest.

Industry groups were pleased the government is finally licensing more areas for onshore oil and gas exploration, after ministers have repeatedly promised a fracking “revolution” that they claim could reduce energy bills and boost economic activity. While there has been a huge amount of controversy about fracking, little has actually taken place on British soil beyond exploratory drilling.

The British Geological Survey last year estimated that deposits that could supply the country with gas for up to 40 years, although it is still unclear whether the cost of extracting it from the ground will be worth it.

Simon Walker, director-general of the Institute of Directors, said the announcement marks “another step forward on the road towards a dynamic, productive and well regulated shale industry in the UK”.

“There’s still a way to go before the industry really takes off, but opening up a new licensing round while increasing safeguards for the natural environment is welcome evidence of the government’s commitment to maximising the benefits of a British shale industry,” he said.

Ken Cronin, chief executive of UK Onshore Operators Group, said it should be seen as a positive sign for investors that the industry was “one of the heaviest regulated industries in the UK and acts as an exemplar for the rest of Europe.” 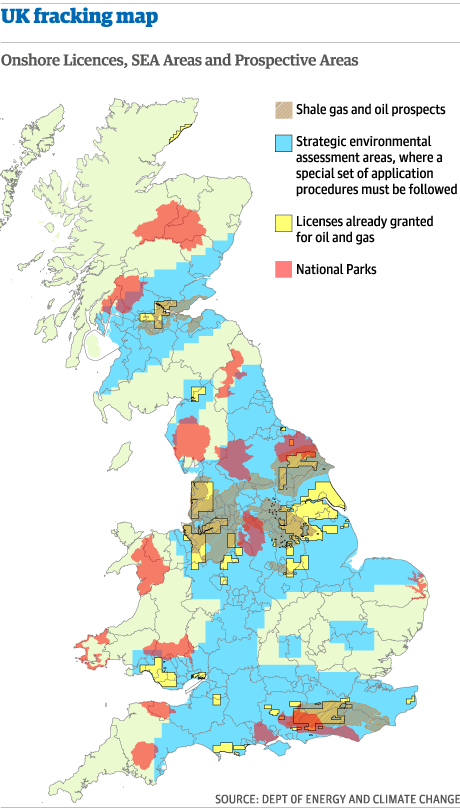 Shale mapFriends of the Earth’s energy campaigner, Tony Bosworth, said: “Today the risk of fracking has spread. This threat to the environment and public health could now affect millions more people.

“Those who thought that fracking would only happen in other places will now worry about it happening on their doorstep.

“Fracking is increasingly politically toxic and is far from being seen as the holy grail of energy policy by those local to proposed drilling sites.”