Shale gas firms to get more power to drill under homes 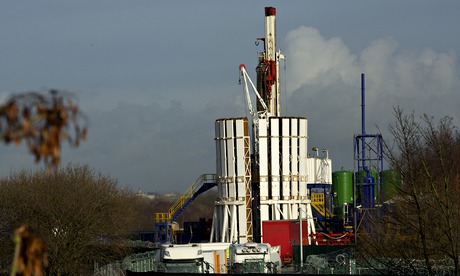 The group of academics is calling for the development of shale gas drilling sites in the UK, like this one in Salford, to be fast-tracked. Photograph: Christopher Thomond for the Guardian

A group of 50 academics from some of the UK’s leading universities today call on politicians to fast-track a UK shale gas industry, the latest salvo in an increasingly polarised debate around fracking.

In a letter to the Guardian on Thursday, the scientists argue there are “undeniable economic, environmental and national security benefits” from shale being produced in the north-west of the country. The move comes just days after Sir Paul McCartney and 150 other celebrities called on the government to immediately halt all drilling operations on the grounds that they could damage the environment. New measures were included in the Queen’s speech to allow shale companies to drill more easily under people’s homes. The government, aware of the risk of a backbench rebellion and the threat of legal actions, stressed any proposals to reform the trespass laws were “entirely dependent on the outcome of a government consultation”.

Cameron assured MPs that the measures would not impact on anyone’s garden, with his officials saying any digging would take place at a minimum of 300m underground with compensation provided to local communities.

Tory whips are nervous that southern MPs will protest and the Liberal Democrats will flake off. The signatories of the Guardian letter which was organised by North West Energy Task Force, a business group funded by Centrica, the owner of British Gas, and Cuadrilla Resources chaired by former BP boss, Lord Browne.

It says: “As geoscientists and petroleum engineers from Britain’s leading academic institutions, we call on all political and decision-makers at all levels to put aside their political differences and focus on the undeniable economic, environmental and national security benefits on offer to the UK from the responsible development of natural gas from Lancashire’s shale.”

Last night one of the signatories, Professor Richard Selley, a geologist at Imperial College, London, said despite the changes in the Queens Speech more needed to be done to streamline planning. “In the US it can take two weeks to get the goahead to drill a conventional well whereas it takes nine to 12 months here. For shale wells it is even longer in Britain,” he explained.

Shale has caused natural gas prices to plunge in America where it has been exploited in vast quantities triggering excitement about the potential to reduce Britain’s soaring household heating bills.

But most industry experts warn the economics of extraction here remain unclear in a much-more crowded island and even if large quantities can be produced the volumes could largely be exported, unlike in the US where this is prevented.

The government confirmed its intention to change trespass laws and allow fracking companies to drill under people’s homes without their permission in parliament but the measure was not included in the infrastructure bill as expected. Instead, ministers will wait for the result of a 12-week consulation before moving to add the measure to legislation. The proposal is highly controversial but mMinisters and the shale gas and oil industry see the move as essential to speeding up the exploitation of the resource.