Source: http://www.theguardian.com/environment/2014/jan/17/emails-uk-shale-gas-fracking-opposition
Government officials accused of cheerleading for fracking by sharing ‘lines to take’ and meeting for post-dinner drinks 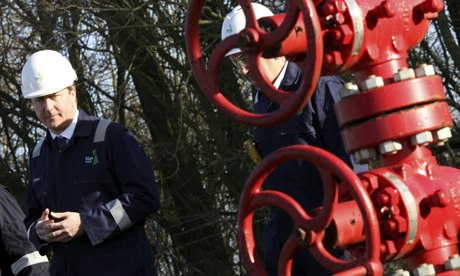 Officials shared pre-prepared statements with the industry last year before major announcements and hosted high-level dinners with “further discussion over post-dinner drinks”, while the industry shared long lists of “stakeholders” to be targeted. Critics said the government was acting as an arm of the gas industry” and was guilty of cheerleading, but officials defended the discussionsaid facilitating discussions was “right and proper” as “right and proper”.

This week David Cameron said the government was “going all out for shale” and announced financial incentives for councils and local communities, labelled bribes by opponents. There have been major protests against fracking at sites across the country, and a Guardian poll last summer showed the public evenly split for and against shale gas wells near them.

The emails, sent throughout 2013, are often chatty, with summer holidays discussed, and in one case the Department of Energy and Climate Change (Decc) apologises to the UK Onshore Operators Group (UKOOG): “Sorry to raise your blood pressure on this subject again, no expletives please!” following a discussion of contentious policy points. In another email, UKOOG’s chief executive, Ken Cronin, tells Duarte Figueira, head of Decc’s office of unconventional gas and oil: “Thanks for a productive meeting (it’s like being set homework).”

Decc emailed what it called “lines to take” to UKOOG before the publication of a review by Public Health England of the potential public health effects of chemical and radioactive pollutants from fracking. One such line was: “We are confident that there is robust and appropriate regulation in the UK to ensure safe operations that minimise impacts to human health.”

Another email, from the big six energy company Centrica to Decc officials, warned that Lancashire county council was far from convinced about the level of regulation. Centrica, which spent £100m on a 25% share of Cuadrilla’s fracking operation in the county, said: “The most common theme [of a county council meeting] was that separate onshore regulation is needed of shale, they clearly don’t feel totally comfortable with the current situation/or understand how it will work.”

Cameron has rejected the need for specific shale gas regulations and has seen off EU proposals for binding rules for shale gas exploration.

Centrica also met Decc to discuss “managing national and local stakeholders”, and shared a list of stakeholders, as did IGas, the company facing fracking protests in Salford. In another email, Centrica told Decc it was planning to line up academics to make its case: “Our polling shows academics are the most trusted sources of information to the public, so we are looking at ways to work with the academic community to present the scientific facts around shale.” Decc told Centrica the discussions between the two were “really useful”.

Centrica emailed Decc a figure of 74,000 potential jobs linked to shale gas development, a number later repeated by Cameron and ministers despite Decc’s own study estimating a peak of 16,000 to 32,000 jobs.

The emails also give further details of a dinner in May hosted bythe cabinet secretary, Sir Jeremy Heywood, at which senior civil servants and fracking executives met. The two-hour dinner, at the Preston Marriott, was to be followed by “further discussion over post-dinner drinks”.

A spokeswoman for Decc said: “Decc has working relationships with external partners across its portfolio and this is no different with regards to shale gas. It is right and proper that Decc facilitates discussions between companies, regulators and other interested parties as part of this. The government believes that shale gas has the potential to provide the UK with greater energy security, growth and jobs. We are encouraging safe and environmentally sound exploration to determine this potential.”

Cronin, of UKOOG, said: “Given the amount of regulatory and wider industry issues at present, you would expect Decc to have a fairly open dialogue with the industry trade body just as Decc has with environmental NGOs, as witnessed by the NGOs’ input into the strategic environmental assessment announced in December.”

Lawrence Carter, energy campaigner at Greenpeace UK, which made the FOI requests now published by Decc, said: “Decc has again been revealed to be acting as an arm of the gas industry. The government are supposed to represent the interests of the public when they deal with these companies, but the evidence is piling up that they’re all in it together.” British Gas owner Centrica currently has an executive working within Decc on secondment.

Shadow energy minister Tom Greatrex said shale gas could have a role to play in improving energy security, but added: “I would expect government to engage with key stakeholders, including businesses, but to do so in order to provide responsible leadership, not pliant cheerleading. It is increasingly concerning that Tory ministers seek to exaggerate the potential benefits of shale and dismiss genuine and legitimate concerns. The public would expect government to be challenging shale companies on their interaction with communities, not agreeing press lines with them.”

Green party MP Caroline Lucas said: “This is yet more evidence of the creepily cosy relationship between Decc and big energy. Apparently it’s not enough to give fracking companies generous tax breaks, the government also has to help them with their PR. Instead of cheerleading for fracking, the government should be working with community and renewable energy to move us towards a low carbon future.”

A spokesman for Centrica said: “It is completely appropriate that we regularly meet with environmental NGOs, the energy regulator and Decc to discuss a range of issues from shale development to renewables. The information shared is all in the public domain.”

A Cabinet Office spokeswoman said: “The cabinet secretary regularly meets businesses from all sectors of the economy – these meetings are recorded and published in the usual way.”