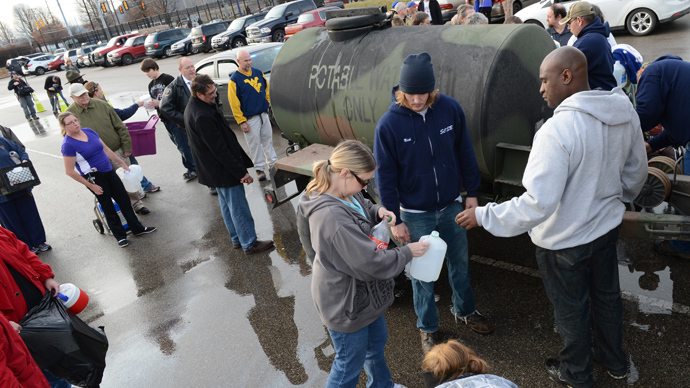 West Virginia American Water customers line up for water at the Gestamp Plant after waiting hours for a water truck, only to have it empited in about 20 minutes on January 10, 2014 in South Charleston, West Virginia. (Tom Hindman / Getty Images / AFP)

Freedom Industries, the company responsible for the methanol leak that contaminated the water supply in a West Virginia town, has filed for Chapter 11 bankruptcy, according to a new report.

The company’s Board of Directors convened at a special meeting on Friday to file a voluntary petition for bankruptcy protection, according to WVNS-TV in West Virginia. Notes taken at the meeting obtained by the Wall Street Journal indicate that Freedom Industries estimates the company debt is currently at approximately $10 million, although the inevitable clean-up costs, lawsuits, and other fees incurred because of the spill will add to that burden.

Approximately 300,000 people throughout nine counties near Charleston, West Virginia have been under a “do not use” tap water order since January 9. The mandate was put in place because a coal-cleaning chemical, known as 4-methlycyclohexane methanol, seeped into the Elk River. The bankruptcy document claimed that some sort of object appeared to have pierced an already-leaking storage tank, releasing so much of the chemical into the river that some witnesses said they saw it pooling in ditches along roadsides.

“It is presently hypothesized that a local water line break adjacent to the Charleston Facility may have, or contributed to, the ground beneath a storage tank at the Charleston Facility freezing in the extraordinary frigid temperatures in the days immediately preceding the incident,” the filing speculated. “The debtor and investigative authorities have taken note of the hole in the affected storage tank that appears to have come from an object piercing upwards through the base of the affected storage tank.”

The “do not use” order stipulated that residents should not drink, cook, bathe in, or wash with the water – even if they tried to rid it of contaminants by boiling. In some instances the water that was coming out of the tap was flammable, as evidenced by a number of people who posted images and video of their experiences online. The prohibition has been lifted for most of the 300,000 people, even though the water coming out of the tap was a startling shade of yellow.

Federal authorities have said that they plan to investigate the company, which has not been the subject of a safety inspection since 1991. US Attorney Booth Goodwin told WVNS-TV that the bankruptcy filing does not change anything from their standpoint, although the average West Virginian seeking restitution by way of a lawsuit may not be so fortunate.

At least 20 lawsuits have already been filed against Freedom Industries since the spill began, and filing for Chapter 11 does help the company avoid paying punitive damages in many of them. The filing itself admits that vendors have demanded Freedom Industries compensate them in cash, quickly putting a major strain on the company’s financial resources.

“Likewise, the defense of the numerous suits filed against the debtor will exhaust the debtor’s liquidity,” the documents note, as quoted by Reuters. This legal condition puts an indefinite stay on the pending suits.