Fracking in the UK: ‘We’re going all out for shale,’ admits Cameron 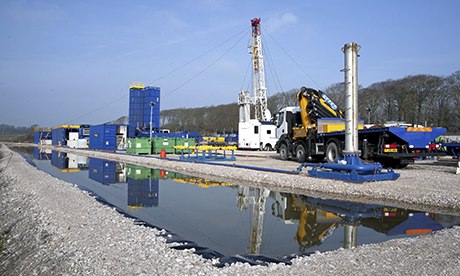 A shale gas drilling rig in Weeton, Lancashire. Photograph: FLPA/Alamy
David Cameron is to declare that his government is “going all out for shale” as he announces that councils will be entitled to keep 100% of business rates raised from fracking sites in a deal expected to generate millions of pounds for local authorities.

In a renewed attempt to win support for the controversial expansion of fracking, the prime minister will also say that revenues generated by shale gas companies could be paid directly in cash to homeowners living nearby.

The prime minister will make a new pitch to shore up support for fracking amid concerns about the use of high-pressure water and chemicals to fracture underground rock, thereby releasing trapped gas. New fracking sites have opened up in the Midlands, Cumbria and Wales.

Cameron, who is to visit a fracking site, will announce that the government is to double from 50% to 100% the amount that councils in England can keep in business rates raised from shale gas sites. The offer, which was proposed last year by the Institute of Directors, could be worth up to £1.7m a year for a typical site.

The prime minister will also try to reach out to concerned local communities by saying that the industry will consult on how to distribute funds of up to £5m-£10m for a typical site over its lifetime – a lump sum of £100,000 when a test well is fracked, plus 1% of revenues. Direct cash payments could be made to homeowners living near fracking sites.

Cameron will say: “A key part of our long-term economic plan to secure Britain’s future is to back businesses with better infrastructure. That’s why we’re going all out for shale. It will mean more jobs and opportunities for people, and economic security for our country.”

George Osborne, who has spoken of the “huge potential” of shale gas, announced plans in his autumn statement last month to halve the taxes levied on fracking companies exploring for the gas. He told MPs: “We are prepared to push the boundaries of scientific endeavour, including in controversial areas, because Britain has always been a pioneer. The country that was the first to extract oil and gas from deep under the sea should not turn its back on new sources of energy like shale gas because it’s all too difficult.”

Jane Thomas, senior campaigner at Friends of the Earth, likened the decision to grant councils 100% of business rates from shale gas companies to a bribe. Thomas said: “Today’s announcement from the government that councils can keep all the business rate revenue they receive from fracking companies marks a new low in the government’s attempts to curry fracking favour with local people.

“Friends of the Earth believe that this is the first time that government money is being use to incentivise local communities. These community sweeteners also raise huge concerns about conflicts of interest if those councils who potentially will benefit from this money are also the ones who determine the planning applications from fracking companies in the first place.”

James Sproule, chief economist at the Institute of Directors, said: “The IoD recommended last year that the government allow local authorities to keep 100% of the business rates from shale sites, so we very much welcome this as another encouraging step in the right direction. It’s vital that local communities see the benefits of new industry in their area, and this announcement sits alongside existing plans to support communities connected with the development of shale gas.

“Investment from Total is a vote of long-term confidence in the UK shale industry, and is a welcome sign that the government is creating the conditions necessary to maximise the potential benefits of a new domestic energy source. The wider benefits are clear; shale gas development could create tens of thousands of jobs, reduce imports, generate significant tax revenue and support a resurgence in British manufacturing. In short, shale gas could be a new North Sea for Britain.”

Tom Greatrex, the shadow energy minister, said: “Gas will remain an important part of our energy mix in the future, and if shale gas can replace our rapidly depleting North Sea reserves it could help improve our energy security. It is right that any communities that host nationally significant energy infrastructure are able to share in its rewards.

“But the government must get its priorities right. Only by fully addressing legitimate environmental and safety concerns about fracking with robust regulation and comprehensive monitoring will people have confidence that the exploration and possible extraction of shale gas is a safe and reliable source that can contribute to the UK’s energy mix.”