Taxpayers to pay for fracking pollution if companies go bust 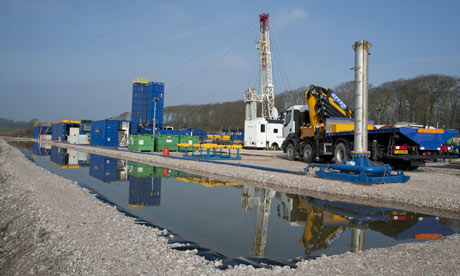 Taxpayers will pay to clean up any pollution caused by fracking if the companies go bankrupt, after a proposal to make UK operators take out insurance against such damage was ruled out by the government.

Energy companies including Centrica-backed Cuadrilla are poised to drill shale gas wells around the country after the Treasury published draft legislation on Tuesday for tax breaks for the industry. Hydraulic fracturing – or fracking – is the controversial technique that involves pumping sand, chemicals and water underground to extract shale gas trapped in rocks.

Campaigners and a cross-party group of MPs argue that before operators are granted permits to frack, they should have to take out a bond to pay for potential pollution incidents. Without such a bond, campaigners argued, clean-up costs would have to be paid for with public money if a company went bust.

But on Monday, the environment minister Dan Rogerson said that there was no case for an amendment bringing in such proposals to the draft water bill. He told MPs: “We believe that the existing regulatory framework is fit for purpose for the exploration and exploitation of onshore oil and gas activities. There are a great number of checks and controls available to us to ensure that operators comply with the requirements of their permits and deal with the wider pollution risks without adding to existing regulation.”

The government could not support the new clause, he said, adding that if fracking companies caused pollution they could be fined under existing regulations.

However, Lib Dem MP, Roger Williams, who backed the proposed amendment to environmental permitting regulations, said: “It is true that, if properly implemented and enforced, existing regulation could mitigate many of the risks posed by fracking, but we should still plan for the low-probability, high-risk scenario of a pollution incident. The amendment would simply ensure that, if the worst did happen, there was clear liability in place and the cost of clean-up did not fall on the public purse.”

Energy companies and ministers have repeatedly said a high standard of regulation means fracking in the UK will avoid the environmental concerns seen in the US, where fracking has been linked to water contamination and dangerous levels of radioactivity at waste sites. In November, Cuadrilla CEO Francis Egan told MPs fracking was “completely safe“, and the water and oil and gas industries signed a memorandum of understanding over the impact of shale gas operations on water supplies.

Liability guarantees akin to those in the proposed amendment are already a requirement for companies that run landfill sites before they begin operating sites. While companies can currently be fined for polluting waterways, campaigners say the proposed bond for fracking explorers would address the problem of companies going bankrupt and becoming unable to pay for cleanup costs.

Rob Cunningham, head of water policy at the RSPB, said: “The prime minister promised one of the most stringent regulatory regimes for fracking in the world but his government appears more interested in tax cuts than managing risk. It really doesn’t matter if you are pro or anti fracking, this proposal would simply ensure that when things do go wrong shareholders, not taxpayers bear the cost for cleanup if companies go bust or cease trading. If government’s response boils down to concerns over cost of insurance it sheds an interesting light on just how safe they really think the technology is.”