Grassroots campaigns can stop fracking one town at a time

City councils and local activists have stymied shale gas mining in New York, and could prove an example for others to follow. 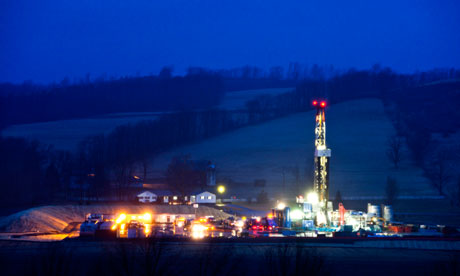 Accounts of flammable tap water and sudden sickness in rural Pennsylvania have spurred questions as to the safety of shale gas mining. Photograph: Jim Lo Scalzo/EPA/Corbis

Readers of the New York Daily News were treated to a little unsolicited advice from Ed Rendell recently. The former Pennsylvania governor, a Democrat, who presided over much of the fracking boom in his state from 2003 to 2011, invited his neighboring governor – who’s been sitting on the fence over shale gas mining – to join the party.

In Pennsylvania, Rendell effused, “thousands of solid jobs with good salaries were created, communities came back to life and investment in the state soared”.

What the Daily News failed to mention is that Rendell has lobbied the Environmental Protection Agency in favor of a driller company, Range Resources, and is currently a paid consultant of Elements Partners, a private equity firm with big stakes in several energy companies that are engaged in fracking.

And what Rendell failed to mention is that the drilling of over 150,000 wells for natural gas has transformed large swaths of rural Pennsylvania into what basically are industrial zones, bristling with monster trucks, wastewater ponds, and traffic jams. Air pollution is higher in counties with drilling than those without and residents complain about round-the-clock noise.

Ed Rendell also didn’t mention the McIntyre family, who live in Butler County – western Pennsylvania’s frack zone – and whose members suffer from projectile vomiting, headaches, breathing problems, mysterious skin rashes … the list goes on. The family dog died suddenly, after lapping up some water the family believes was problematic. The McIntyres no longer drink, brush their teeth, or do their laundry with the water piped into their home.

New Yorkers worried about fracking have been looking at the impact it’s had on their neighbors in Pennsylvania. Increasingly, they don’t like what they see there. After a fact-finding tour to the town of Troy, in northern Pennsylvania, Terry Gipson, a New York state senator, reported that, despite signs of renewed economic activity in the region, he couldn’t help wonder what will happen when the gas boom goes bust, as all booms inevitably do. Gipson asks:

“Envision a time when the trucks are gone, the lease money is spent, the trailers and the diners are empty, and all that is left is unusable farm land with a contaminated water supply. What will these people do then?”

Many New Yorkers have been asking similar questions. Surveys show that support for hydraulic fracturing in the state is at an all-time low. In a poll released by Siena College in April, 45% of voters opposed fracking and 40% supported it (15% said they didn’t yet know enough to decide). New Yorkers used to be evenly split on the issue. Interestingly, upstate New York, which tends to be conservative, politically, and which would presumably have the most to gain from allowing gas drilling, reported the highest levels of opposition to fracking: 50% want to see it stay out of the state.

These sentiments have led to a groundswell of local rebellions against the gas companies. The Albany Times Union reports that there are already 55 separate municipal bans against fracking, and 105 moratoriums in the state. These local bans were challenged in court by the energy companies, who argued that the state alone has the regulatory authority to prohibit drilling. But earlier this month the state supreme court disagreed, ruling that the town of Dryden has the right to prohibit fracking within its borders.

This decision may turn out to be the nail in the coffin for fracking in New York state. If their investment can be rendered worthless by a local town council’s vote, gas companies may now be reluctant to spend millions of dollars leasing drill sites.

But anti-fracking activists are not resting on their laurels quite yet, because Governor Andrew Cuomo, a Democrat, has yet to decide whether to permit gas drilling. Cuomo has promised to announce his decision on a number of deadlines, but they’ve all come and gone without a definitive word. Touted as a potential presidential contender in 2016, the governor is understandably reluctant to step into this political minefield.

Earlier reports indicated that the governor make a decision after New York’s health commissioner gives his assessment on drilling, which is expected to be released in a matter of weeks. But the latest word from Cuomo’s aides is that “there is no timetable for a decision”.

The state put in place a provisional moratorium on drilling in 2008. John Armstrong, of the coalition New Yorkers Against Fracking (NYAF), told me that ever since then, there has been a spontaneous groundswell of “hundreds of kitchen table organizations petitioning and holding public meetings to educate the public on the dangers of fracking”.

One such group formed in Vestal, New York, a town just across the state line from Dimock, Pennsylvania, whose flaming taps in the movie Gasland made it a poster child for fracking gone bad. Sue Rapp, the co-founder of Vestal Residents for Safe Energy (VeRSE) has been tramping from door to door with a petition that calls for the town council to ban drilling. She said that many residents need little convincing, since they have seen homes in Pennsylvania with 500-gallon “water buffaloes” – plastic tankards full of drinking water sitting on their front lawns. She says that they’ve seen how property values plummet, banks revoke mortgages and natural landscapes are altered. Already, endless caravans of trucks barrel through their own town, kicking up dust as they head to Pennsylvania to service the gas industry.

Rapp told me that the recent court ruling has encouraged her, and she says it will free town boards from the fear that the gas companies will sue against any fracking bans. Now that this legal hurdle has been overcome, she expects that a lot more towns will soon vote to keep drillers at bay. Her organization is one of over 200 groups that make up NYAF, an eclectic alliance that includes health professionals, unions, faith institutions, farmers and even breweries.

Rapp is proud, she says, that the movement against drilling in New York grew from the bottom up rather than the top down. Mainline environmental groups were initially ambivalent, believing that natural gas is cleaner than coal, and that its use in America’s power plants would lead to significant reductions in carbon dioxide emissions. Those reductions have occurred, but evidence has mounted that mining shale gas carries risks.

But Sue Rapp doesn’t see this as an environmental movement so much as an existential quest to preserve a peaceful way of life in the rolling hills of New York’s bucolic Southern Tier. Maybe that is why their grassroots campaign appears – for the moment at least – to be succeeding where so many other environmental crusades have failed to ignite the public’s imagination.