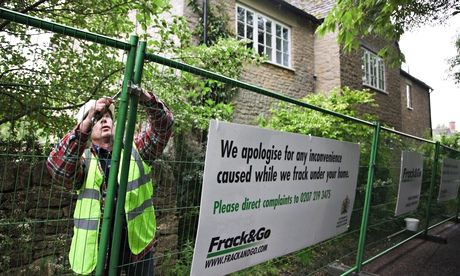 The government confirmed its intention to change trespass laws and allow fracking companies to drill under people’s homes without their permission in the Queen’s speech on Wednesday, but the measure was not included in the infrastructure bill as expected. Instead, ministers will wait for the result of a 12-week consultation before moving to add the measure to legislation.

The proposal is highly controversial, being opposed by three-quarters of the public, and Greenpeace turned David Cameron’s Oxfordshire home into a “fracking site” on Wednesday morning. But ministers and the shale gas and oil industry see the move as essential to speeding up the exploitation of the resource.

Green legislation laid out for the last parliament before the 2015 general election included a right for local communities to buy into renewable energy projects, a 5p tax on plastic bags in England and a new, but watered-down, pledge to make all new homes zero-carbon by 2016. New laws to enable the rapid eradication of invasive alien species will be introduced but an expected ban on the use of wild animals in circuses was missing.

The Queen referred to the change in trespass law by stating: “The [infrastructure] bill will enhance the UK’s energy independence and security by opening up access to shale and geothermal sites.” But official briefing notes accompanying the speech said: “Subject to consultation, this bill would support the development of gas and oil from shale and geothermal energy by clarifying and streamlining the underground access regime. The government is currently running a full consultation on this policy and the legislation is entirely dependent on the outcome of that consultation.”

Government sources from both coalition parties insisted there was no rowing back on their intention to accelerate fracking. Earlier in 2014, ministers abolished the need to inform residents individually of planned fracking activity in their area despite the public expressing overwhelming opposition in a consultation.

“The [trespass and fracking] consultation contains only one proposal, the same as that put forward by the Queen today, which raises the question of whether the consultation is genuine or if, in fact, the outcome is a foregone conclusion,” said the legal expert Angus Evers, at King & Wood Mallesons SJ Berwin. “I was surprised when the consultation came out a few weeks ago. But when you are talking about taking away people’s property rights it is entirely right that there should be a public consultation. However, I think the proposal will go ahead in some shape or form.”

John Sauven, the Greenpeace UK executive director, said announcing the trespass measure in the Queen’s speech just days after launching the consultation made “a mockery of public participation”. He said: “Ministers are losing the argument on fracking and are now steamrolling over people’s rights in order to sacrifice our countryside and climate.”

Greenpeace activists in hard hats and high-vis jackets turned up on the doorstep of the prime minister’s cottage in the Cotswold hamlet of Dean, Oxfordshire, on Wednesday and sealed off the property’s front gate with security fencing. They erected a sign that read: “We apologise for any inconvenience we may cause while we frack under your home,” and directed complaints to the PM’s office.

Ken Cronin, chief executive of the UK Onshore Operators Group (UKOOG), which represents the onshore oil and gas industry, welcomed the Queen’s speech. “The proposed legislation will bring the onshore oil and gas and geothermal industries into line with other activities, such as mining and utilities, and will have no noticeable effect on the lives of home and property owners,” he said. “It serves no one if an anomaly in the legal system allows the few to block access to much needed natural resources.” He said UKOOG would respond to the consultation but did not think the government’s attitude to fracking had altered.

Nina Skorupska, chief executive of the Renewable Energy Association, welcomed giving communities the right to take a financial stake in local wind and solar energy projects: “This is an important step for securing sustained public support for renewables.” But she criticised exemptions to the zero-carbon home standard, saying these benefited developers over the homebuyers who would face higher energy bills as a result.

The proposal to tackle the growing problem of invasive alien species follows recommendations from the Law Commission in February. It found: “They pose a significant threat to ecosystems as well as damaging property and infrastructure [but] existing law does not contain sufficient powers to allow for their timely and effective control or eradication.”